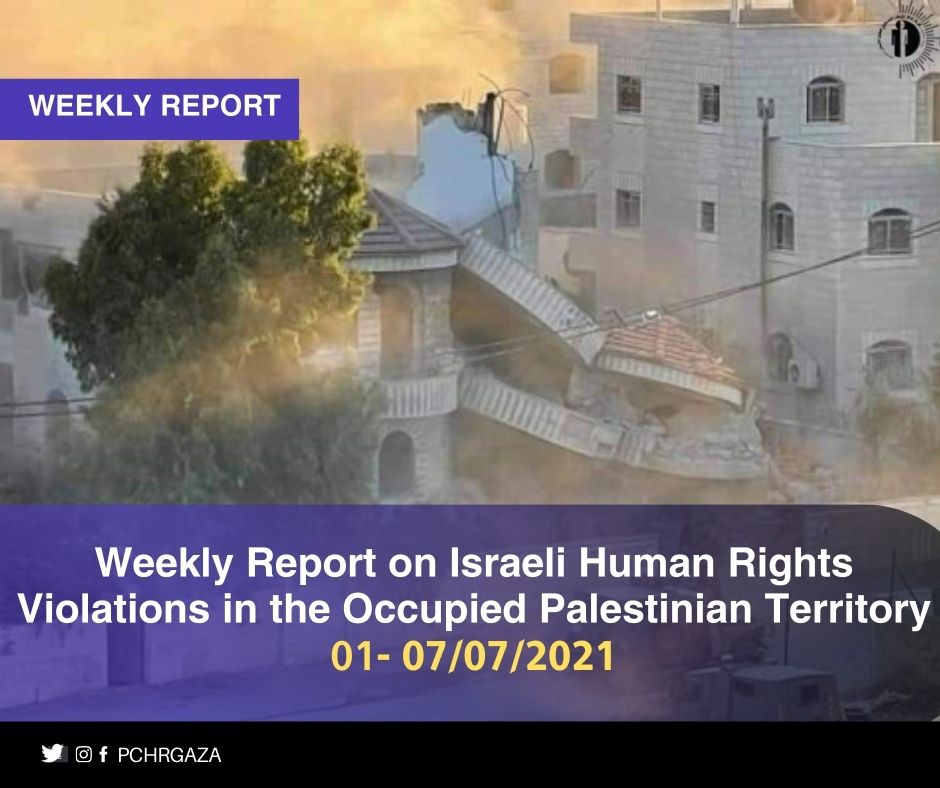 Israeli forces continued to commit crimes and multi-layered violations against Palestinian civilians and their properties, including raids into Palestinian cities that are characterized with excessive use of force, assault, abuse and attacks on civilians, turning the West Bank into isolated blocks of land. Israeli settlement expansion on Palestinian properties and land continued. The last few weeks witnessed a systemic demolition campaign as well as issuance of demolition and cease-construction notices in an effort to create a Jewish majority in Jerusalem. Meanwhile, the Gaza Strip enters its 15th year under blockade, exacerbating the humanitarian hardships across the territory especially as the Strip still suffers the aftermath of the Israeli military aggression that took place two months ago.

A Palestinian civilian was killed and 8 others were wounded due to excessive use of force by Israeli forces in the West Bank, including occupied East Jerusalem: a Palestinian man was killed, and two others wounded in a separate incident, in Nablus; 5 were wounded in Hebron; and another in Salfit. Dozens suffocated due to tear gas inhalation, fired by Israeli forces in its attacks in the West Bank.

In the Gaza Strip, two Palestinians (including 1 woman) were wounded due to splattered glass after Israeli forces launched an airstrike on a plot of land in Jabalia, northern Gaza Strip. Additionally, 3 Israeli forces shootings were reported against agricultural lands in eastern Khan Younis.

Israeli forces carried out 107 incursions into the West Bank, including occupied East Jerusalem. Those incursions included raids of civilian houses and shootings, enticing fear among civilians, and attacking many of them. During this week’s incursions, 58 Palestinians were arrested, including 3 children and two women. Among the arrestees, were lawyer Fareed Mohammed al-Atrash (44), Director of the Independent Commission for Human Rights (ICHR) in southern West Bank and Dr. Shatha ‘Odeh, General-Director of the Health Work Committees (HWC) and President of the Palestinian NGO Network (PNGO), the army confiscated her car as well; Israeli authorities had issued a 6-month shut down on UHWC 4 months ago. Additionally, Israeli forces raided the Headquarter of the of the Union of Agricultural Work Committees (UAWC) in al-Bireh City, confiscated some its contents and then ordered to close it for 6 months.

Salfit: Israeli plan to expand “Yakir” and “Nofim” settlements, which are established on the lands of Deir Istiya village, with an area of 8500 dunums

PCHR fieldworkers reported and documented two attacks by Israeli settlers on Palestinian civilians and their properties:

Occupied East Jerusalem: metal stairs established in a Palestinian’s land in Jerusalem to connect several buildings that were seized by settlers.

The Israeli authorities continued to impose collective punishments against the people of the Gaza Strip by strictly tightening its closure on the Gaza Strip, which entered its 15th year, without any indication for a solution in the future, depriving the Gaza population from enjoying their economic, social and cultural rights. Since the May military aggression on Gaza, Israeli authorities have reinforced the restrictions imposed on the entry of goods and raw materials via Gaza’s sole commercial crossing, Karm Abu Salem, as well as its restrictions on the movement of individuals to and from the West Bank and Israel via Beit Hanoun “Erez” crossing.

Meanwhile, Israeli authorities continued to divide the West Bank into separate cantons with key roads blocked by the Israeli occupation since the Second Intifada and with temporary and permanent checkpoints, where civilian movement is restricted, and they are subject to arrest.