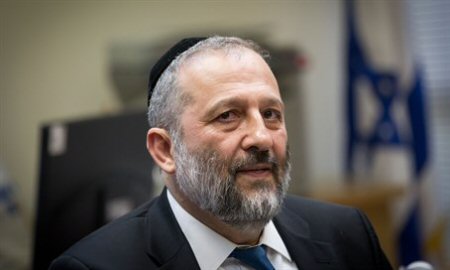 Israeli Interior Minister Aryeh Deri and his wife were questioned once again, on Monday, by the police’s anti-corruption and organised crime unit for alleged involvement in criminal offenses, Israel’s Channel 2 television reported.

The minister is suspected of receiving bribes and money laundering, fraud, dishonesty, theft and tax evasion.

Deri and his wife, Yaffa, were questioned at the end of May following an arrest campaign that saw 14 people with close connections to the minister held by police.

In the past few months, Israeli police have collected thousands of documents relating to an association run by Yaffa, which would shed light on suspicions against the couple.

According to the channel, PNN further reports, investigations with Dari and his wife will take several months, because of the various cases in which they are suspected of involvement.

On 30 May, Israeli police interrogated Deri for 11 hours. There have been calls for him to be suspended from office until the investigation into the case is concluded.

Deri spent 22 months in prison between 2000 and 2002 after being convicted of bribery during his tenure as interior minister and returned to politics at the start of the decade.

He returned to the leadership of the Shas party before the election last year, replacing Eli Yishai. He returned to the post of interior minister earlier this year after a court ruled that his previous conviction did not mean he could not hold the post.