Israeli Soldiers Abduct A Palestinian In Tubas, Confiscate A Tractor In Nablus 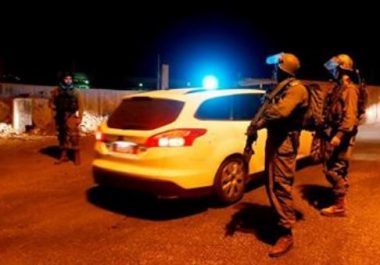 Israeli soldiers abducted, on Wednesday at dawn a young Palestinian man in Tubas city, in the northeastern part of the occupied West Bank, confiscated a tractor and attacked two Palestinians, in Qosra town, south of Nablus, in northern West Bank.

The Tubas office of the Palestinian Prisoners’ Society (PPS) said the soldiers invaded and ransacked many homes in the city, and abducted Jihad Masa’eed, before taking him to an unknown destination.

The soldiers also broke into and ransacked several homes in Tubas, and clashed with local youths who hurled stones at the military vehicles, invading their city.

Similar clashes took place in nearby towns, after the army invaded them, and violently searched several homes.

In Qalqilia, in the northern part of the occupied West Bank, the soldiers shot five Palestinians, and abducted a young man.