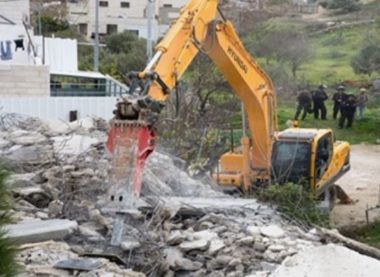 Israeli forces, overnight Thursday, notified the families of three alleged Palestinian attackers, of their intention to demolish their houses across the occupied West Bank, the Palestinian News and Info Agency reported.

The Palestine Prisoners’ Society (PPS) confirmed that Israeli forces broke into the family home of Mohammad Walid Hanatsheh, in Attira neighborhood of the central West Bank city of Ramallah, and handed the family a military order to demolish their house.

Forces also handed the family of Yazan Mghamas, a military order to demolish their house in an incursion in Birzeit town, north of Ramallah.

Hanatsheh and Mghamas, are currently in Israeli custody for their alleged involvement along with Samer Arbid in the killing of an Israeli settler near the illegal colonial settlement of Dolev, near the Palestinian village of Ras Karkar, in August 2019.

Arbid was hospitalized in critical condition for 45 days after undergoing interrogation with the Israeli internal security agency, the Shin Bet, for his purported involvement in the settler’s killing.

Kamel Atawneh said that soldiers invaded his 140-meter-sized house, and took photos and measurements in preparation for the planned punitive demolition.

Atawneh’s son, Mahmoud, who is currently in Israeli custody, is accused of allegedly stabbing a settler at the Gush Etzion colonial settlement bloc, south of Bethlehem, in July 2019.

Israel resorts to punitively demolishing the family homes of Palestinians as a way to intimidate, and deter others from attempting to injure Israelis in the future.

Interesting to note that Israel does not apply the same policy to Israeli settlers involved in fatal attacks against Palestinians.

Article 33 of the 4th Geneva Convention states that collective punishment is a war crime.