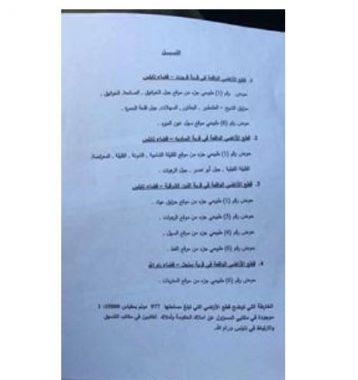 The Israeli government has decided, Thursday, to illegally confiscate nearly 977 Dunams of Palestinian lands, south of the northern part of the occupied West Bank, after ruling them as “State-owned property.”

The 977 Dunams are privately-owned by many families from the villages of Qaryout, as-Sawiya, al-Lubban ash-Sharqiyya and Sinjel, south of Nablus.

Ghassan Daghlas, a Palestinian official in charge of Israeli settlements file at the Palestinian authority in the northern part of the West Bank, said the lands are located in basin 1, in al-Khawaneeq Mountain, as-Sane’a, Harayeq ash-Sheikh, at-Tantour, al-Batayin, as-Sahlat, and al-Qal’a al-Hamra, in addition to Basin 6 in Ein al-Mohra Meadows in Qaryout.

On his part, the head of the National Committee against the Wall and Colonies, Waleed ‘Assaf, said the Israeli decision is a very serious escalation, and aims at “legalizing” all illegal colonialist outposts, and the establishment of a new one, between Shilo and Shvut Rachel illegal colonies, south of Nablus.

‘Assaf also stated that Israel is considering naming the new settlement “Gilad Zaar,” the son of terrorist Moshe Zaar, who led bombing attacks targeting Palestinian mayors in the West Bank, by wiring their cars 40 years ago.

He further stated that the Israeli government has also confiscated 2200 Dunams of Palestinian lands, in the northern West Bank district of Tulkarem, in addition to 4000 Dunams owned by Palestinians from Z’ayyim and as-Sawahra towns, near Ma’aleh Adumim illegal colony, and added that the decisions were made after US President Donald Trump was sworn into office.