Israel-Palestine: Does Jared Kushner have the Chops to Negotiate Peace in a 50 Year Conflict? 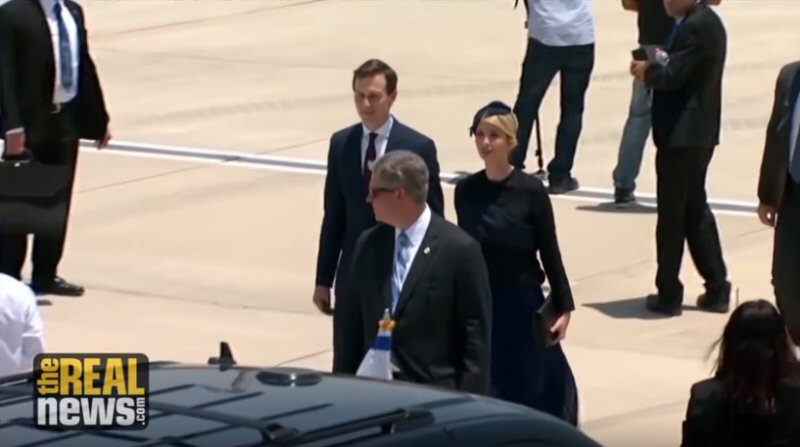 Daoud Kuttab is a Palestinian journalist and media activists. He is the former Ferris Professor of Journalism at PrincetonUniversity. Daoud Kuttab is currently the director general of Community Media Network (CMN) a not for profit media organization dedicated to advancing independent media in the Arab region. CMN is registered in Jordan and Palestine and administers Radio al Balad in Amman, and www.ammannet.net.

SHARMINI PERIES: It’s The Real News Network, I’m Sharmini Peries coming to you from Baltimore. You may recall the Donald Trump announce in January that his son-in-law, Jared Kushner, will bring an end to the Israeli-Palestinian conflict. These days, his son-in-law, Jared Kushner, can be found in Israel-Palestine meeting with officials, including Palestinian president Mahmoud Abbas. Kushner has extensive business ties in Israel, and has visited Israel many times. Kushner is accompanied by Jason Greenblatt, Trump’s special representative for international negotiations. Senior officials of the Palestinian government has expressed disappointment with the meetings with Kushner of late, as early as last week, saying that the US delegation seemed to be nothing more than representatives of the Israeli prime minister, Netanyahu, and that the US delegation insisted that the Palestinian government cease financial support to political prisoners and the families of the Palestinians who died in confrontations with Israeli military. Joining us to discuss this now is Daoud Kuttab. Daoud is an award-winning Palestinian journalist and former Ferris professor of journalism at Princeton University. He is a columnist with Al-Monitor and director of the Community Media Network in Amman, Jordan. Daoud, good to have you back.

DAOUD KUTTAB: The Americans are very close to the Israeli government, and the Israeli government and Benjamin Netanyahu are playing them like a fiddle. They’re giving them half information, partial information, and they’re sending them after goose, to one goose chase after another, over issues that really are not so important in the conflict. We have a 50 year old occupation that needs to end, and still the Israelis are talking about something on Palestinian television that incites to violence, and something about Palestinian prisoners being paid a very small stipend to keep their families having bread on their table, because their breadwinner is in prison. These are issues that are totally not relevant to the peace process, but the Israelis are clever in postponing discussions of the basic issues by bringing in these side issues.

SHARMINI PERIES: Alright. How is the facilitation of Jared Kushner as a mediator between the two sides being received by Palestinians?

DAOUD KUTTAB: I think he has been seen as naïve, and not very serious, and certainly not very well, is not a good student of the job that he had. After some giants of the US diplomacy like James Baker and George Mitchell and others, Mr. Kushner really doesn’t know the issues, which is okay if he prepares himself well and doesn’t allow one side to pull the wool over his head. That’s the problem we have, is that the Israelis are playing him, and they are using him to basically postpone any serious discussion about ending the occupation.

SHARMINI PERIES: Alright. There’s also speculation in Washington that he’s staying out of the limelight in Washington and fleeing to Israel, just because he’s been under so much scrutiny and heat in Washington related to various ties related to Russia-gate, and so on. Anyhow, President Trump visited Israel-Palestine and met with Israeli and Palestinian government officials. He also invited Prime Minister Netanyahu and President Mahmoud Abbas to Washington, had joint press conferences with them. Now, several media channels are speculating that Trump may be in fact abandoning his efforts to broker what he previously called the greatest deal that Israel and Palestine could have together. What are the thoughts in Israel and Palestine about these steps that Trump wants to take, and is it making any headway?

DAOUD KUTTAB: I’m not sure about this abandoning the negotiations. I’m not sure if it is used to assure the Palestinians to make compromises that they’re not willing, because they’re saying, “We’ll walk away, so it’s for your advantage to keep us happy and keep us engaged.” Anybody who’s following the Palestinian position knows clearly that there are certain red lines that Palestinians cannot give up on. They cannot give up on East Jerusalem, they cannot give up entirely on the issue of the right of return, the ’67 borders, and so on. The idea of walking away is a kind of a negotiation tactic, that really is a bluff that people call very quickly and know that it’s not true, not because the Americans are enchanted with the Palestinians, it’s because everybody knows, including the Arab countries which the US is trying to make good relations with, that the Palestinian cause is the crux of the conflict. As long as the Palestinian occupation resistance is going on, the whole atmosphere of the region is poisoned. It’s to the US national interest to have the issue of Palestine-Israel resolved. It’s not a kind of a gift that they want to give the Palestinians.

SHARMINI PERIES: Right. Daoud, you wrote in a recent piece in Al-Monitor, titled “Palestinian Press Groups Blast Ban on Websites Linked to Abbas Rivals.” Meanwhile, President Abbas has asked Israel to cut electricity to Gaza, stop payments to Hamas prisoners. Two babies apparently recently had been denied health services, in terms of, they were born with issues and they had to travel to a hospital in Israel, and that was not permitted. The situation there with the Palestinian Authority and Gaza is heightening. With these kinds of tensions between Fatah and Hamas, how do you explain how anything can move forward, in terms of negotiating a peace deal for Palestinians and Israel?

DAOUD KUTTAB: This is the complication here. I think Mahmoud Abbas is able and willing to make certain compromises, but he is under pressure from different groups, including he has to show that he has the ability to deliver Gaza, and he has to show that he controls his own party, because he has Mohammed Dahlan, who is a kind of renegade leader who’s close to the United Arab Emirates and Egypt. He’s fighting on more than one battle, and the blocking of the websites is one of these battles in which he’s trying to silence some of his opposition. I think he still believes that there is a possibility of some progress with the Trump administration, but as those expectations diminish, I think he will go back in and try to find some kind of a solution, a reconciliation with his political opponents. If he can get something, because he’s 82 and he’s basically trying to have something to show for his life and his political career, and if he can’t do that, I think he will resign or just leave the political scene. He’s in a very difficult position, he’s trying to juggle three watermelons in one hand, and it’s very hard.

SHARMINI PERIES: Yeah. Earlier you made reference to the fact that Kushner is not a good student of all of this. As you mentioned, there are people who’ve committed their life to studying the conflict and trying to think about peace and the possibilities of peace, and what needs to be negotiated. In relation to that, you wrote an article in Al-Monitor titled “Kushner’s First Foray into the Middle East Peace Reveals Challenges Ahead.” What are those challenges that you think lay ahead for him, that he needs to tackle before he can approach this in a more balanced way?

DAOUD KUTTAB: I think he needs to get some really good advice from people who are experts. Even Jason Greenblatt, with all due respect to him, just when he came this last trip, he made 10 tweets about meeting with Israelis, meeting with Israeli officials, visiting families of Israelis, meeting with an Israeli writer who’s very right wing and wants to annex the West Bank. He’s meeting with all these Israelis, and then me makes a kind of symbolic visit to a Palestinian hospital in East Jerusalem, and meets with Abbas. That’s the only thing, he had two meetings with Palestinians, and according to his own tweets, he had 10 different meetings with Israelis. That’s not the kind of balance that you need if you want to be anywhere close to an honest broker. You need to really spend more time with both teams and both sides, and not just take a side.Another thing, there was an attack on an Israeli soldier in East Jerusalem, occupied East Jerusalem. The US delegation called it “a savage terrorist act.” Now, according to the US definition of terrorism, terrorism is only when it’s taken against non-combatants. This was a soldier. By US definition, it’s not act of terrorism. In Palestinian eyes, it’s an act of resistance. In Israeli eyes it could be something they’re not happy with, but you cannot call it, as a US negotiator with both teams, that one side is committing savage terrorism if you want to negotiate with them and you want them to stop paying for those who are killed in the struggle. This is a national struggle between two peoples. The way that the US is looking at it, as if it’s an internal Israeli issue rather than a national conflict between two parties.

SHARMINI PERIES: Alright. Daoud, thank you so much for joining us. As this process proceeds, we’d love to have you back to have your thoughts on what’s going on there. Thank you.