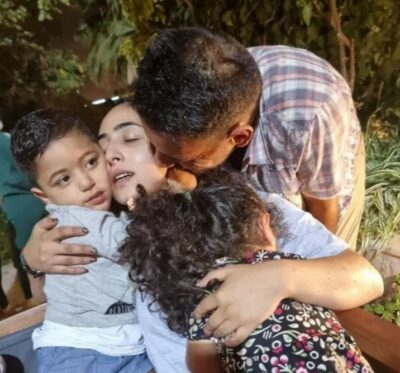 On Tuesday evening, Israel released the imprisoned Palestinian journalist, Lama Ghosha, after imposing restrictions on her, including house arrest and barring her from Social Media outlets.

Ghosha will still have to go to a court hearing scheduled for this coming Sunday, September 18, and has to remain confined to her home for ten days, in addition to being barred from social media, until a final ruling is made.

Her conditional release came after her lawyer appealed a decision remanding her until the next court hearing.

Her lawyer, Nasser Odah, said the court decided to release her to house arrest on the condition of not using social media outlets and a bail of $15,000. The journalist was taken prisoner on September 4 after many soldiers stormed and ransacked her home in the Sheikh Jarrah neighborhood in occupied Jerusalem and confiscated her phone and computer.

Lama is a married mother of two children and is studying to obtain her Master’s Degree in journalism at Birzeit University near the central West Bank city of Ramallah.