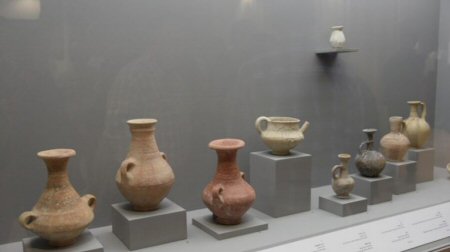 The exhibit ‘Finds Gone Astray’ in Jerusalem constitutes a violation of international law, yet frames Israel as a preserver of history.

On Monday, December 31, 2018, the Bible Lands Museum in Jerusalem unveiled an exhibit of antiquities seized by Israeli authorities from the occupied West Bank.

The exhibit “Finds Gone Astray” displays 20 antiquities seized by the Israeli Civil Administration from alleged “looters” and “unauthorized dealers in antiquities” in the West Bank. The exhibition claims that most of the artifacts originated from archaeological sites in the West Bank, while others were smuggled into the area from elsewhere in the Middle East, including Syria.

Emek Shaveh, an Israeli organization that opposes the politicization of archaeology, released a statement condemning the exhibition. First, the group emphasizes that looted artifacts “are of no scientific value” because without knowing the objects’ excavation sites, one cannot determine their origins or age with any certainty. “So what is the purpose of the exhibition?” Emek Shaveh asks. “To portray the Palestinians as robbers and destroyers while we Israelis save and preserve the heritage and antiquities of the past because they are ours.”

Indeed, while “Finds Gone Astray” laments looters in the West Bank, it makes no mention of the violations of international law inherent in the exhibit. Geneva, Hague and UNESCO Conventions prohibit Israel as an occupying power from assuming ownership of West Bank antiquities or transferring such artifacts out of the territory. To date, according to Emek Shaveh, the Civil Administration has seized 40,000 allegedly looted artifacts from the West Bank since Israel occupied the area in 1967.