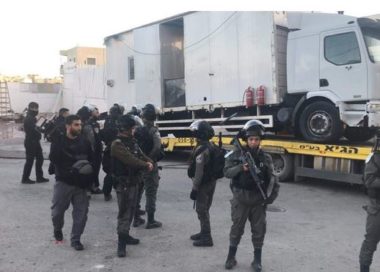 Dozens of Israeli soldiers invaded, on Tuesday at dawn, dozens of Palestinian homes  and buildings in the al-‘Isawiya town in occupied Jerusalem, and violently searched them, before interrogating many Palestinians, and abducted at least twenty of them, in addition to summoning two others for interrogation.

Mohammad Abu al-Hummus, a member of the Follow-Up Committee in al-‘Isawiya, said dozens of soldiers surrounded the town, and were heavily deployed in many areas, especially on its main entrance, before invading it.

He added that the soldiers installed roadblocks in the town, before conducting massive and violent searches of cars, homes, commercial buildings, and a gas station where they also confiscated a propane tank.

Abu al-Hummus further stated that the soldiers summoned two Palestinians for interrogation, and installed a military tent at the western entrance of the town to use it as an “operation room,” after complete sealing the area.

Israeli police officers were also deployed at the entrance of the town, during early morning hours, before stopping and searching dozens of vehicles, including buses transporting children to their schools.

Fifteen of the abducted Palestinians have been identified as: