Israel To Build Hundreds Of Colonialist Units In Occupied Jerusalem 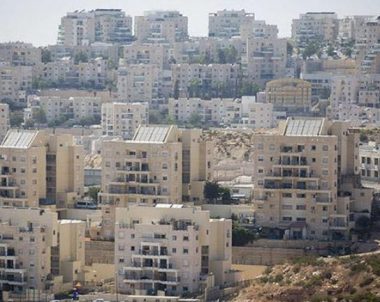 The Israeli “Planning and Construction Committee” presented, Tuesday, plans for the constructions of more than 1000 new units for illegal colonialist settlers in occupied Jerusalem.

The colony is situated west of Beit Hanina neighborhood, and east of Hizma town, surrounding the two Palestinian communities and preventing their natural growth.

The plan includes the construction of 1064 units, which will expand Pisgat Zeev, enabling it to encroach towards the western part of Beit Hanina, and the eastern part of Hizma.

After the inauguration of U.S. President Donald Trump, and his illegal policies, including the recognition of occupied Jerusalem as the unified capital of Israel, in direct violation of International Law, Israel started advancing numerous colonialist projects, aiming at the construction of thousands of units, in Jerusalem, and various parts of the West Bank.

It is worth mentioning that the plan for the constructions was first presented in July 2017, as part of a project which aims at building 2000 new units.

While Israel continues to build and expand its illegal colonies, Palestinian communities and towns, in occupied Jerusalem, and various areas in the occupied West Bank, continue to be denied the right to build homes and property.

On Monday, Israeli soldiers invaded the al-Jawaya area, east of Yatta town, south of the southern West Bank city of Hebron, and handed orders halting the construction of a home and a well.

On the same say, the soldiers demolished a carwash facility, and a barn, owned by Palestinians from Silwan town and Umm Tuba village, in occupied Jerusalem.