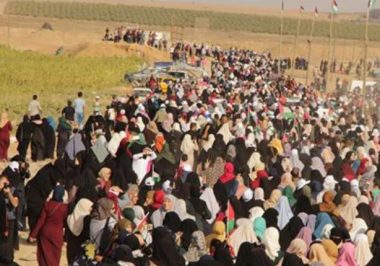 Israeli soldiers shot, on Tuesday evening, three Palestinian women, and caused dozens to suffer the effects of teargas inhalation, during an all-women protest on Palestinian lands near the Israeli fence, east of Gaza city.

The soldiers, stationed in their sniper posts hundreds of meters away, fired live rounds and dozens of high-velocity gas bombs at the protesters, wounding three women with live fire, and causing dozens to suffer the effects of teargas inhalation.

Medics provided the injured women with the urgently-need medical aid and moved the three women, who were shot with live fire, to the Shifa Medical Center, west of Gaza city.

The Israeli attack took place after thousands of women nonviolently marched on Palestinian lands, near the fence, carrying Palestinian flags, and chanting against Trump’s “Deal of the Century,” which strips the Palestinian of their basic rights, including the Right of Return to all refugees, libertarian and independence.

The “deal” also completely removed occupied Jerusalem from any future “peace agreement,” after the U.S. President officially recognized the city as the “unified capital of Israel,” in direct violation of International Law, and numerous United Nations and Security Council resolutions.