Army Demolishes A Home Near Bethlehem 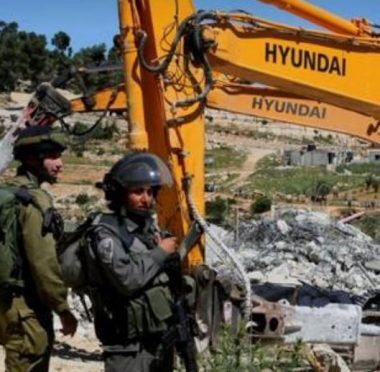 Israeli soldiers demolished, on Tuesday morning, a Palestinian home in Battir town, in the West Bank city of Bethlehem.

The Palestinian said he submitted to the Israeli side, mainly the so-called “Guardian of Absentee Property,” detailed maps, documents and construction plans of the property, but the army went ahead and demolished his home.

It is worth mentioning that Israel designated large areas of private Palestinian lands in Battir, as part of Area C of the West Bank, particularity as areas where the Palestinians are prohibited from building.

Israel has been preventing the Palestinians from building, or expanding existing property, in Area C, under full military and administrative control.

Area C is more than %60 of the West Bank and is also subject to the seriously-escalating construction and expansion of Israel’s illegal colonies, in direct violation of International Law and the Fourth Geneva Convention.