Israel To Demolish A Palestinian-owned Home In Jerusalem 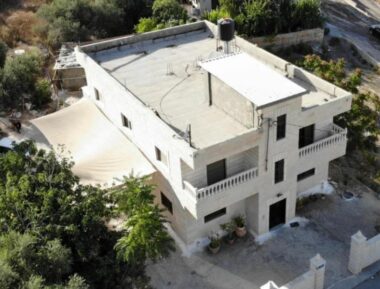 Israeli soldiers invaded, Sunday, the al-‘Isawiya Palestinian town, in occupied East Jerusalem, and handed a resident a military order for the demolition of his two-story home by Monday, or face high fines and fees.

The home is owned by Fadi Ali Oleyyan, the head of the security department at the Al-Aqsa Mosque.

Oleyyan said the City Council informed him that he needs to demolish his 370 square/meter two-story building, which consists of four apartments inhabited by him, his two brothers, and their father.

The home, he added, was built ten years ago and is home to seventeen family members, including twelve children. The demolition of the home will result in the forced displacement of 17 people.

He also said that his building, which was built on the family’s land, is within the structural zone allotted for construction, and added that, on August 8th, 2020, an Israeli court rejected an appeal to freeze the demolition order, and denied the family the right to continue the legal work to obtain the needed permits from the building.

It is worth mentioning that Oleyyan has repeatedly been detained and interrogated by the occupation army during numerous invasions by soldiers and illegal colonialist settlers into the courtyard of the Al-Aqsa Mosque.