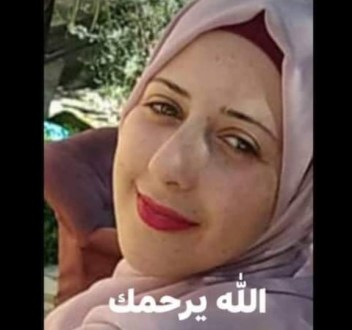 The Palestinian Civil Affairs Authority has reported, Friday, that Israel intends to transfer the corpse of a Palestinian woman who was killed by Israeli soldiers in Jerusalem, on September 30th.

It said that the corpse of Isra’ Khaled Khzaimiah, 30, from Qabatia town, south of the northern West Bank city of Jenin, will be handed to the Palestinian side at a Salem military roadblock near Jenin, at 4:00 PM. Her funeral procession will take place at 5 PM in Qabatia.

Khzaimiah was killed near the Chain Gate, leading to the Al-Aqsa Mosque, in occupied Jerusalem, and Israel kept refusing to transfer her corpse to her family for a proper burial ceremony.

The Israeli police claimed the woman carried a sharp object and attempted to stab officers before they delivered the fatal shots.

It also claimed that the woman exited the Al-Aqsa Mosque Compound through the Chain Gate, and “pulled a knife out before attempting to stab officers, before they fired live rounds at her.”

Eyewitnesses said the woman was still alive, but seriously injured and unable to move, and added that the police prevented anybody from reaching her to render the urgently needed first aid before she succumbed to her wounds.

Isra’ was a married mother of four children, the youngest are four and two years of age and the oldest is only ten, from Qabatia town, south of the northern West Bank city of Jenin.