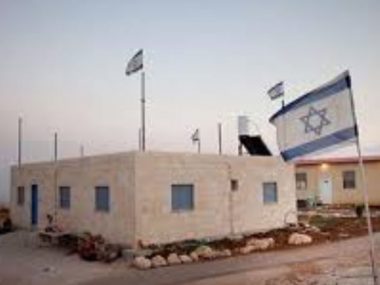 The Israeli government is slated to discuss granting official recognition of Havat Gilad illegal outpost, which was built on  illegally-seized private Palestinian lands south of Nablus, in the northern part of the occupied West Bank.

The government will discuss a proposal by Israeli Defense Minister Avigdor Lieberman, who is also illegally living in the West Bank, demanding full recognition and legalization of the outpost, which will provide it government funding and development.

It is worth mentioning that Havat Gilad was illegally built on stolen Palestinian lands in the year 2002, and is currently inhabited by 40  Israeli paramilitary militia members and their families.

The Israeli government, headed by Prime Minister Benjamin Netanyahu, has been actively supporting the construction and expansion of the illegal colonies, including random outposts, in the occupied West Bank, including in and around East Jerusalem, in direct violation of International Law, and the Fourth Geneva Convention.

All of the land on which these settlement colonies have been constructed is Palestinian land, most of which has been seized by force in violation of international law. Some of the land has been taken by coercion – by tricking or blackmailing Palestinian landowners into transferring their title deed to the land.