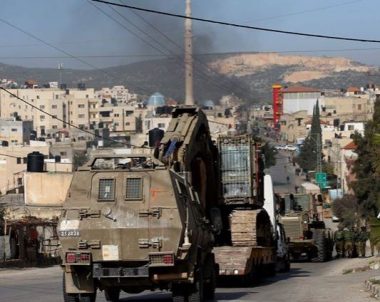 Israeli soldiers abducted, during the pre-dawn hours on Sunday morning, eight Palestinians, including one woman, in Wad Burqin and Burqin towns, southwest of Jenin, in the northern part of the West Bank.

Media sources in Jenin said the soldiers invaded and searched many homes, and abducted Saleh Jarir Jarrar, after ransacking his home.

The soldiers also invaded and searched the homes of his uncles, Jaber and Ahmad Jarrar, and interrogated the families.

In Burqin town, the soldiers abducted Afeef Khaled ‘Ateeq, and his wife Farah, in addition to Ahmad Mosleh ‘Ateeq and Ezzeddin Ahmad Zar’ini, who was also injured by fragments of a concussion grenade, fired by the soldiers.

On Saturday, the soldiers killed Ahmad Samir Abu ‘Obeid, 19, injured at least eight others, and abducted four, in addition to demolishing a room and a barn, during a massive invasion into Burqin town, west of the northern West Bank city of Jenin.

On January 18th, the Israeli army besieged a home where they killed Ahmad Ismail Jarrar, after they mistook him for his cousin, Ahmad Nasr Jarrar, 22, accused of the killing of an Israeli settler.