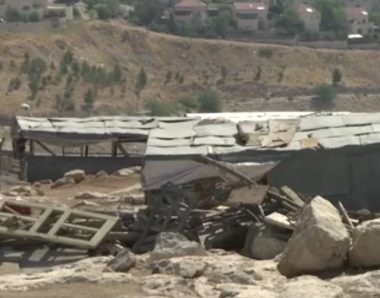 Daoud Jahalin, the representative of Abu Nuwwar, said dozens of soldiers, police officers and representatives of the “Civil Administration Office,” which is run by the military in the West Bank, invaded the community after surrounding it.

Jahalin added that the soldiers demolished two classrooms, for children in the third and fourth grades, which were built through European donations.

He also stated that the school has a license, which was submitted to the Israeli Supreme Court, adding that the case is still pending.

The school is the only educational facility in al-Jahalin but has been constantly targeted by Israel, while just days ago, human rights groups have warned about the demolitions, and their consequences.

“Israel wants to remove us from our land so that it can build and expand its illegal colonies,” Jahalin stated, “They want us out, but we are here to stay, in our village – we will remain steadfast.”