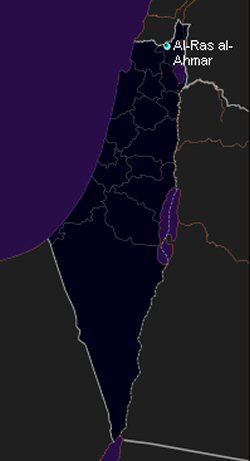 Mutaz Bisharat, a Palestinian official in charge of Jordan Valley’s Israeli settlements file at the Palestinian Authority (PA), told Ma’an News Agency that Israeli authorities delivered the notices to residents in the al-Ras al-Ahmar area in the Jordan Valley.

Bisharat added that about 1,079 dunams (267 acres) are under threat of seizure, pointing out that the notice did not mention reasons of the action.

International rights organizations consider the continuation of the Israeli campaign which targets Palestinians in the Jordan Valley, whether though confiscations, demolitions or evictions under the pretext of holding military exercises, as a violation of international humanitarian law.

Since the beginning of the 1967 occupation of the West Bank, Israel has taken possession of hundreds of thousands of dunams by declaring it state land.

Israeli authorities, in 1968, banned Palestinians from registering their lands, and subsequently took advantage of previously low rates of land registration to take areas currently or previously in use by locals but not registered as such.

The lands are then used to construct Jewish-only settlements on the land, while further confiscation often uses the pretext of the settlements’ security.