Israel To Transfer Corpses Of Three Slain Palestinians To Their Families 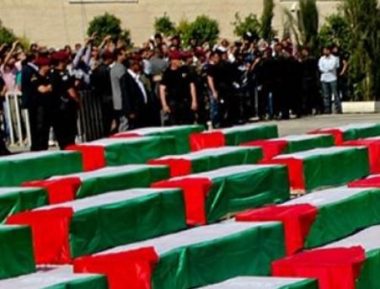 The Israeli authorities have decided to transfer the corpses of three slain Palestinians back to their families in the occupied West Bank, on Friday evening.

The army will be transferring the corpse of Mohammad Marshoud, 30, from the northern West Bank city of Nablus, to the Palestinian side at Jeet Junction.

He was killed, on April 9 2018, when an Israeli colonial settler shot him near Mishor Adumim colony between Jerusalem and Jericho.

In addition, the corpse of Rami Sabarna, 36, from Beit Ummar near the southern West Bank city of Hebron, will also be transferred to his family at the District Coordination Office in Hebron.

He was killed by the soldiers while he, and other workers, were conducting work for the Hebron City Council to rehabilitate and expand a road near the Ibrahimi Mosque.

The soldiers also intend to transfer the corpse of Mohammad Anbar, 36, from Tulkarem, in northern West Bank.

Anbar died on April 8th, 2018, from critical wounds he sustained on April 2nd when the soldiers shot him multiple times at a roadblock near Tulkarem.