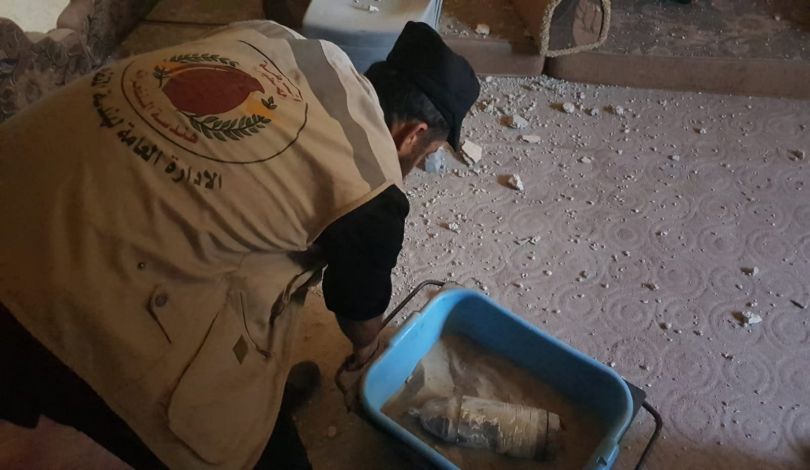 The sources told the Palestinian Information Center’s reporter that Israeli warplanes fired two missiles at farmland to the east of Khan Younis City.

At the same time, Israeli tanks near the eastern border fence between Gaza and Israel, fired shells at two resistance posts north and south of Khan Younis. Damage to homes was reported, with no civilian casualties.

The Israeli army claimed that the assault was in response to incendiary balloons released by Palestinians in Gaza, that drifted into adjacent Israeli settlements the previous day.

The Ministry of Interior and National Security in the Gaza Strip, Monday, announced that a ‘heavy caliber’ unexploded artillery shell penetrated a Palestinian-owned home, in the south of the coastal territory, the Jerusalem Press reported.

The ministry said, in a statement, that “an Israeli artillery shell, which did not explode, landed on Monday, inside a citizen’s house, east of Khan Younis.”

She pointed out that “the explosives engineering crews of the police force removed the shell from the house and worked to neutralize, secure and seize it in accordance with the technical and engineering principles followed.”

In recent weeks, the Israeli occupation has inflicted airstrikes and artillery shells on the besieged Strip, stopped the entrance of diesel fuel, shutting down electricity production, and imposed a full closure on the coastal waters.

According to the latest report of the Special Rapporteur on the situation of human rights in
the Palestinian territories, Michael Lynk, “Collective punishment is an inflamed scar that runs across the entire 53-year-old Israeli occupation of Palestine. Over these years, two million Palestinians in Gaza have endured a comprehensive air, sea and land blockade since 2007, several thousand Palestinian homes have been punitively demolished, extended curfews have paralyzed entire towns and regions, the bodies of dead Palestinians have been withheld from their families, and critical civilian supplies – including food, water and utilities – have been denied at various times. Notwithstanding numerous resolutions, reports and reminders critical of its use, Israel continues to rely upon collective punishment as a prominent instrument in its coercive toolbox of population control.”