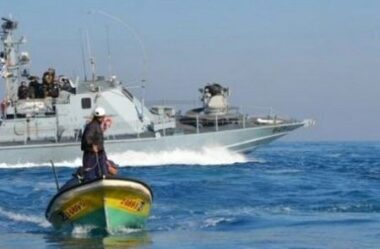 The Israeli navy, on Sunday, attacked Palestinian fishermen and their boats as they sailed within one nautical mile off the Gaza shore, the Palestinian Information Center reported.

Local Coordinator of the fishermen’s union, Zakariya Bakr said the Israeli total closure of the Gaza sea, which has continued for the seventh consecutive day, deprives Gaza fishermen of their daily sustenance and increases their families’ suffering.

Even prior to the recent escalations in Gaza, the Israeli navy was attacking and harassing fishermen on a daily basis, for no specific reason.

The 1993 Oslo accords allowed fishing up to 20 nautical miles off the coast of Gaza, but the Israeli authorities have reduced the fishing zone to between three and six nautical miles.

According to local media sources, Israeli soldiers opened fire at a group of shepherds in the east of al-Bureij refugee camp in central Gaza, which forced them to leave their work.

Farmlands to the east of al-Qarara town, east of Khan Younis, in the southern Gaza Strip, also came under similar gunfire attack by soldiers.

No casualties were reported.