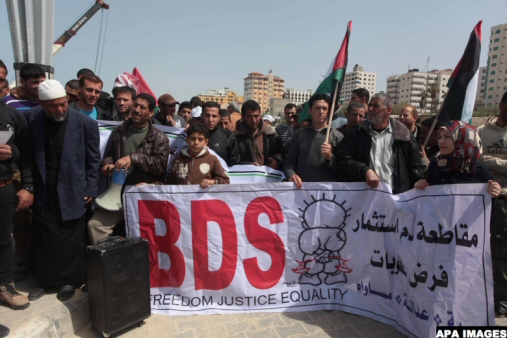 The Israeli government is compiling a list of BDS (Boycott, Divestment, Sanctions) activists who are not allowed to travel to Israel. Asa Winstanly of the Electronic Intifada talks about the effort to expose this secret list.

SHARMINI PERIES: It’s The Real News Network. I’m Sharmini Peries coming to you from Baltimore.Measures by the Israeli authorities against the BDS movement, which is the Boycott, Divestment and Sanctions movement, continue to intensify. The newly approved law, which was passed in July, bans BDS supporters from entering Israel. The problem with the law, however, is that it is not simple, of course, to ban people based on their thoughts or opinions, so how are they deciding who they are banning? The Minister of Strategic Affairs, Gilad Erden, admitted that his ministry is compiling a list of BDS activists, and indeed, last month a group had been barred from boarding a Lufthansa flight to Israel, because the airline received a list of banned people.Now, Asa Winstanley published a piece in The Electronic Intifada, titled How is Israel Compiling Its BDS Blacklists?, in which he explains the appeal to the Israeli high court to expose the secret lists. Now joining us from London is Asa Winstanley. He is an investigative journalist and associate editor at The Electronic Intifada.Asa, thank you so much for joining us today.

ASA WINSTANLEY: Good to be with you.

SHARMINI PERIES: Asa, tell us about the appeal to the high court and who is Eitay Mack?

ASA WINSTANLEY: Eitay Mack is an Israeli lawyer and human rights activist. Him and a group of colleagues, other activists, Palestine solidarity activists, recently launched a freedom of information request to the Ministry of Strategic Affairs, which is Gilad Erden’s ministry, asking for details of how Israel is compiling these BDS blacklists. They have basically stonewalled the request and they’re in the process of trying to pass a law which will exempt them from freedom of information law anyway. So they’ve lodged an appeal with the district court in Jerusalem, trying to overturn this decision and make it required for them to reveal the procedures by which they are not only compiling these lists, but sharing them with entities outside of Israel.

SHARMINI PERIES: All right. Now the group of the interfaith activists, who were forbidden from boarding the Lufthansa flight to Tel Aviv, reported that the Israeli intelligence availed their emails. That’s the only way they could have known that they were BDS campaigners. What makes them think that? How do we know their emails were tampered with or actually monitored?

ASA WINSTANLEY: So the reason that they think this is because, although some of the people on the delegation were well known. Alissa Wise is the Deputy Director of Jewish Voice for Peace, which is a Palestine solidarity group in the U.S. of Jewish activists who are critical of Israel. There were seven names on the list, on the blacklist, on the list of people that the Lufthansa staff read out to the group and they said, “These seven people are not going to be able to board this flight.” Only five of those people were actually on the delegation, who were actually having flights. The other two, who they read out on the blacklist, had never bought tickets. They had never been finally involved. They’d never confirmed their involvement in the delegation. They’d been through the initial stages of registering and then realized they had other plans and had to cancel. So those two people had never had tickets with Lufthansa.There was no way those names could have gotten to Israel apart from somebody hacking into or intercepting the emails of Jewish Voice for Peace and the other two groups involved in this interfaith delegation. That’s what Rabbi Alissa Wise strongly suspects, and it seems credible to me.

SHARMINI PERIES: The Israeli Minister of Strategic Affairs, Gilad Erden, said that, actually last year, he said that supporting the BDS will no longer be worth it. What does he actually mean by that?

ASA WINSTANLEY: I suppose they want to put what they might call, or Israeli settlers might call, a price tag on it, making it difficult to be involved in BDS activism. They’ve pushed for changes in the law in the U.S. and the U.K. and Europe to make supporting BDS even illegal. There’s this bill that AIPAC has strongly pushed for in the U.S. to make even a federal offense, potentially even jail, to support BDS. It looks like this law is not going to go ahead, but they’re trying to … They see what BDS … the effects that it has and the successes that it has and in raising awareness as well of Palestinian human rights and Israeli violation of Palestinian rights. It’s had enough successes that it’s considered a strategic threat of the first order, according to the President of Israel, he said last year, I believe.Erden’s ministry, the Strategic Affairs Ministry, was started over a decade ago as a semi-covert, or semi-militarized agency, or semi-security ministry. It was initially focused on Iran and combating the Iranian nuclear energy program. As we know, the Israelis were involved in all sorts of covert action against Iran, including indirect support for people who assassinated Iranian nuclear scientists. We know it was involved in the Stuxnet virus, for example, which destroyed several Iranian nuclear centrifuges. But a couple of years ago, this Ministry was refocused on BDS, with the Iran nuclear deal changing matters. They’ve decided their whole focus is going to be BDS. So we can already see the outlines of a covert campaign.

SHARMINI PERIES: I’m a little confused as to how they are actually implement this law in terms of banning people from entering Israel through its borders. Now one could say, for example, a country has a right to ban people that they consider undesirable from entering the country. It’s not unlike, say, having visa restrictions placed and various countries do that. But this particular law also applies to people who are local and Israeli citizens and so forth, and does it, and how do they actually justify that?

ASA WINSTANLEY: Well, for the time being, the law only applies to non-citizens of Israel, but of course, it does apply to Jewish supporters of BDS who are not Israeli citizens. Rabbi Alissa Wise was the first Jewish person that we know of who was banned from the country and of this particular law. Of course, before this law was passed earlier this year, in the spring, Israel was implementing this in practice anyway. But this law kind of makes it more formalized, and so there has been talk … Erden has been pushing to move towards implementing similar measures again Israeli citizens. Obviously he can’t really ban them from the country, but the first steps towards that are he wanted to start creating a database of Israeli supporters of BDS, who there are, some. They’re a minority, obviously, but there are this great number of dissidents who do support BDS, and of course, the Palestinian citizens of Israel.So we already see things like measures against Omar Barghouti, the Palestinian intellectual who was the co-founder of the BDS movement, who’s had movement restrictions placed on him. At one stage there was a ban from him leaving the country. He lives in present day Israel in the north, with his wife, who is a Palestinian citizen of Israel. Because he’s such a prominent personality in the BDS movement, they’ve tried to make life very hard for him.

SHARMINI PERIES: Asa, I should add that Omar Barghouti was awarded the Gandhi Prize at Yale University just recently and he was allowed out to go receive that price, so all of this adds a very complicated element to the ban on BDS activists.I thank you so much for joining us today, Asa, and look forward to any followups you might have in terms of the court case.

ASA WINSTANLEY: Thanks for having me on.

SHARMINI PERIES: And thank you for joining us on The Real News Network.