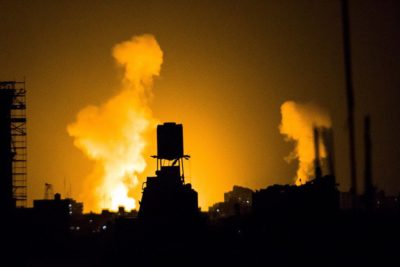 The Israeli Air Fore carried out, overnight, dozens of strikes targeting many areas in the besieged Gaza Strip.

The army said it attacked eighty “Hamas targets” in the costal region, after 30 shells were fired from Gaza into adjacent Israeli area.

The army said the strikes against Gaza were carried out by dozens of fighter jets, and other types of army aircrafts, Israeli daily Haaretz has reported. It added that, according to the army, two of the bombarded buildings in Gaza were used to “manufacture weapons,” in addition to “five military compounds,” and a building used by Hamas’s “general security forces.”

Haaretz also quoted the military saying that the Iron Dome missile defense system managed to intercept eleven shells that were fired from Gaza, into Israeli areas, south of the country. Media sources in Gaza said that among the bombarded targets was a four-story building under construction in the center of Gaza city.

They added that the building was completely destroyed, while the missiles’ impacts also caused damage to several surrounding homes, before ambulances and firefighters rushed to aid the civilians.

The army also fired missiles at a site, which they claimed was run by an armed resistance group, close to the Indonesian Hospital in Beit Lahia, in northern Gaza.

The Health Ministry in Gaza said doctors and hospital workers had to remove many patients from their rooms, and place them in hallways, in fear of further attacks. In addition, the army carried out seventeen airstrikes targeting one site, used by the Al-Qassam Brigades the armed wing of Hamas in Rafah, in the southern part of the Gaza Strip, completely destroying it.

Five shells were fired from Gaza toward Sderot and the western Negev. The ‘Iron Dome’ defense system intercepted four of them. The Israeli military fired a missile east of Jabalia

Israeli military correspondent Roni Daniel, with Channel Two News, said that the Israeli army is preparing for a large-scale offensive on Gaza – especially after it became convinced that the order to fire shells came from Damascus.

The spokesperson of the al-Qassam Brigades, the armed wing of Hamas, said, “The enemy [Israel] is lying — no missiles were fired from Gaza this evening. The Israeli Iron Dome system was alerted to live fired that was fired during Qassam training – not shells fired into Israel.”

Al Jazeera reported that the Islamic Jihad claimed responsibility for firing the shells into Israel.