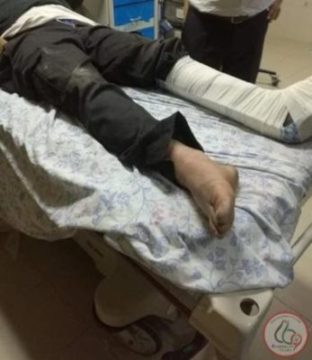 An Israeli army jeep rammed, Saturday, two Palestinians in Azzoun town, east of the northern West Bank city of Qalqilia, while the soldiers fired dozens of gas bombs, causing many Palestinians to suffer the effects of teargas inhalation.

Medical sources have reported that two Palestinians, identified as Omar Abdul-Halim Hussein, 45, and Ahmad Sa’id Salim, 25, suffered various fractures, cuts and bruises after the soldiers deliberately rammed them with their armored jeep, during protests in the town.

They added that local medics provided the two Palestinians with  urgently needed first aid, and rushed them to Darwish Nazzal hospital in Qalqilia; their wounds were described as moderate.

The soldier also fired a barrage of gas bombs and concussion grenades, causing dozens of Palestinians to suffer the effects of teargas inhalation.

Furthermore, the soldiers abducted one Palestinian, after beating him up, and took him to an unknown destination.