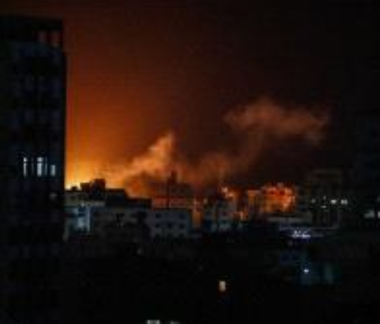 The Israeli Air Forces carried out, at dawn Tuesday, several airstrikes for the second consecutive night, targeting many areas in the besieged and improvised Gaza Strip, after hours of relative calm in and around the coastal region.

Media sources said the army fired missiles at a Palestinian security center, east of Rafah, in the southern part of the Gaza Strip, and attacked the same site with missiles a few hours later.

The missiles caused excessive damage to the site, in addition to surrounding homes and structures, and caused a power blackout in large areas of Rafah.

Several missiles were also fired into another resistance-run site, in Khan Younis city, in southern Gaza Strip, and in Bani Suheila village, east of the city.

It is worth mentioning that the al-Qassam brigades, the armed wing of Hamas, and various armed resistance groups in Gaza, including the Al-Quds Brigades of the Islamic Jihad, have denied firing missiles into Israeli areas, and stated that the shells were fired by an unknown armed group.

On its part, the Israeli army said a missile was fired from Gaza and landed into an open area in Asqalan (Ashkelon).