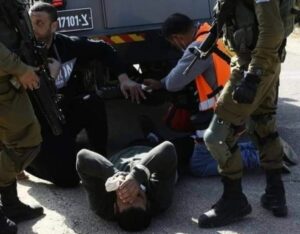 On Friday afternoon, protests took place in a number of West Bank villages to challenge the Israeli expansion of territory on stolen Palestinian land. One of these protests took place in al-Ras village, near Salfit, where an Israeli armored vehicle ran over a Palestinian, seriously injuring him. Another non-violent march was held by Palestinian villagers in Beit Dajjan, east of Nablus in the northern West Bank, and it, too, was attacked by Israeli soldiers.

In al-Ras, a protester was run over and moderately injured by an Israeli military vehicle which was laying an ambush for the protesters. Other protesters were wounded by the Israeli military’s use of tear gas, rubber-coated steel bullets and impact munitions. All of the wounded were treated at the scene by local medics.

In Beit Dajjan, the protest march consisted of a non-violent action by Palestinian villagers and international supporters to to plant seeds on lands threatened with closure by Israeli occupation authorities.

After Friday prayers, the Palestinian villagers marched down to the site of an illegal Israeli colony constructed with the aim of stealing Palestinian land for the expansion of the state of Israel. 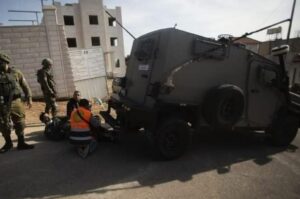 In response to the march, Israeli forces invaded the village and began shooting rubber-coated metal bullets, gas and sound bombs. As a result, dozens of Palestinians suffered from tear gas inhalation, and other injuries resulting from the use of these less-than-lethal weapons.

Palestinians in Beit Dajjan have been organizing a weekly march for about two months, to voice their adamant objection to the Israeli takeover of large tracts of village land to construct a new Israeli settlement