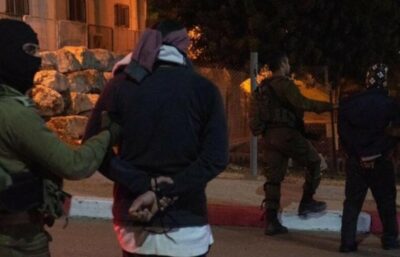 Montaser Samour, the head of the Jenin office of the Palestinian Prisoners’ Society (PPS), said the soldiers abducted two former political prisoners, Mohammad Kamil and Mohammad Nazzal, in addition to Amir Nazzal, from their homes in Qabatia.

Sammour added that the soldiers abducted Saif Atallah Sabah and Qoteiba Mohammad Atiq from their homes in Burqin.

The soldiers also detained Tareq Sobeh and interrogated him for several hours before releasing him.

Media sources in Jenin said Palestinian fighters exchanged fire with the soldiers during the invasion in Qabatia.

In Hebron, in the southern part of the West Bank, the soldiers invaded several areas in the city before storming and ransacking homes, causing damage.

Owners of three of the invaded homes have been identified as Luay al-Jamal, Eyad al-Jamal, and Abdul-Rahman al-Jamal.