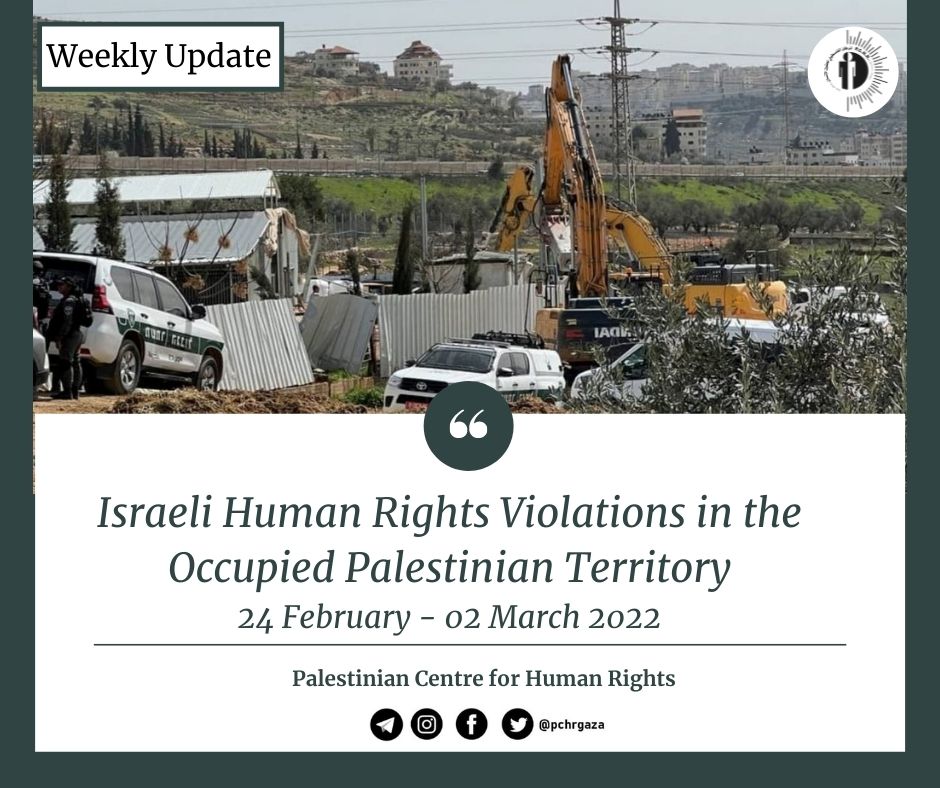 Two Palestinian civilians killed, and 22 others wounded, including 3 children and 2 journalists, by Israeli occupation forces’ (IOF) fire in the West Bank; meanwhile, a fisherman was wounded with rubber bullets in the Gaza Strip. Dozens of others sustained bruises in IOF’s attacks.

At dawn on 01 March 2022, IOF’s Special Unit killed a Palestinian civilian after the former sneaked into Jenin refugee camp to arrest a wanted person and clashed with an armed group member and killed him as well. More details available here. On 02 March 2022, IOF killed a Palestinian university student after shooting him in the head without any justification in Beit Fajjar, southern Bethlehem. More information available here.

On 24 February, a Palestinian driver sustained serious wounded after IOF opened fire at his hand and the bullet entered his abdomen and exited his back. The driver was in his vehicle at the time near al-Jalama checkpoint in Jenin. Other civilians were wounded in separate incidents; mainly in peaceful protests and gatherings. Most prominently was on 28 February 2022 when IOF suppressed thousands of Palestinians commemorating the anniversary of al-Israa’ and al-Me’araj in Bab al-‘Amoud Yard in Jerusalem. As a result, a child with hearing disability was wounded with a sound bomb in her face while tens of civilians sustained bruises. On 25 February 2022, 6 civilians, including a child and 2 journalists, were wounded with rubber bullets during IOF’s suppression of peaceful protests in Qalqilya, Nablus and Hebron. On the same day, 5 civilians were wounded with rubber bullets and a sound bomb fired by IOF during the latter’s protection of settlers’ raid into Kafr al-Deek village, western Salfit, while a sixth civilian was wounded in the head after IOF beat him. Also, a civilian was wounded with a bullet in the left thigh near al-Nabi Younis intersection, northern Hebron; he was then arrested and taken by IOF in a military ambulance.

In the Gaza Strip, IOF opened fire 4 times at agricultural lands in access restricted areas, eastern Khan Younis and Central Gaza Strip. Also, six IOF shootings were reported on fishing boats mostly off the northern, southern, and western Gaza shores. As a result, a fisherman was wounded with a rubber bullet on 25 February 2022.

“So far in 2022, IOF attacks killed 10 Palestinians, including 2 children, and wounded 104 others, including 21 children, 2 paramedics and 9 journalists, all in the West Bank, except one fisherman in the Gaza Strip.”

This week, IOF demolished 15 civilian objects, including 6 houses, displacing 2 families of 13 individuals, including 5 children and 2 women. IOF also demolished 9 commercial facilities, razed a plot of land and seized another and a vehicle.

“Since the beginning of 2022, IOF made 33 families homeless, a total of 211 persons, including 37 women and 98 children. This was the outcome of IOF demolition of 44 houses and 4 residential tents. IOF also demolished 28 other civilian objects, and delivered 6 notices of demolition, cease-construction, and evacuation.”

This week, 6 settler-attacks were reported in the West Bank, resulting in the injury of 2 brothers with bullets, causing bruises to a mother and her daughter and uprooting 45 olive seedlings in addition to puncturing the wheels of 11 vehicles.

“So far this year, settlers carried out 48 attacks on Palestinians and their properties in the West Bank.”

IOF carried out 177 incursions into the West Bank, including occupied East Jerusalem. Those incursions included raids and searches of civilian houses and facilities and establishment of checkpoints. During this week’s incursions, 114 Palestinians were arrested, including 30 children and a woman. IOF also conducted a limited incursion into eastern Khan Younis on 28 February 2022.

“So far in 2022, IOF conducted 1201 incursions into the West Bank, including occupied East Jerusalem, during which 752 Palestinians were arrested, including 93 children and 8 women. IOF also conducted limited incursions into eastern Gaza Strip and arrested 11 Palestinians, including 7 fishermen. Meanwhile, 4 infiltrations were reported; one was via Beit Hanoun “Erez” crossing.”

The Israeli occupation maintains its illegal and inhuman 15-year closure on the Gaza Strip. On 01 March 2022, IOF arrested a Palestinian at Beit Hanoun “Erez” crossing, who came to work in Israel. Details available in PCHR’s monthly update on the Gaza crossings.