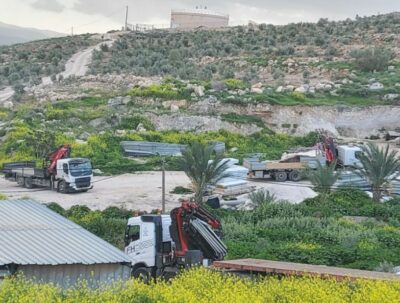 On Thursday, Israeli soldiers invaded the village of Kardala in the Northern Plains of the Jordan Valley in the occupied West Bank and demolished an agricultural structure.

Fuqaha added that the soldiers confiscated the dismantled structure and told him it wasn’t licensed by the “Civil Administration Office,” the administrative branch of the illegal Israeli occupation.

The dismantled structure served as a hub for all agricultural products for the farmers in the area, as they bring their fruits and vegetables to be boxed, wrapped, and distributed to the merchants and market.

In related news, the soldiers invaded the town of Hizma, northeast of the occupied Palestinian capital, Jerusalem, in the West Bank, before closing its main road, in addition to confiscating surveillance recordings from many shops after storming and searching them.

On Thursday at dawn, Israeli soldiers invaded many communities across the occupied West Bank, stormed and ransacked dozens of homes, and abducted twenty-three Palestinians, including former political prisoners, in addition to shooting two with live fire and burning one car.