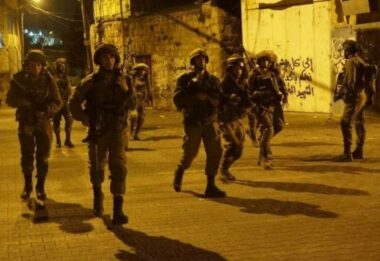 On Thursday at dawn, Israeli soldiers invaded many communities across the occupied West Bank, stormed and ransacked dozens of homes, and abducted twenty-three Palestinians, including former political prisoners, in addition to shooting two with live fire and burning one car.

Several Palestinian protesters hurled Molotov cocktails at the military vehicles while withdrawing from the village.

Media sources said one car was burnt due to Israeli fire during the invasion in Jenin.

It is worth mentioning that Palestinian resistance fighters exchanged fire with the soldiers during invasions into Jenin and several surrounding communities and hurled pipe bombs at the al-Jalama military roadblock northeast of Jenin.

In addition, the soldiers invaded Nablus city in northern West Bank, leading to protests before shooting two young men with live rounds in the chest and arm.

The soldiers also stormed and searched homes in the city before abducting Nasr Jamal Mabrouka, the brother of Adham Mabrouka, 26, who was assassinated by the army on February 8, 2022.

In Beit Dajan, east of Nablus, the soldiers abducted a former political prisoner, Soheib Thabet, after storming his home and ransacking it.