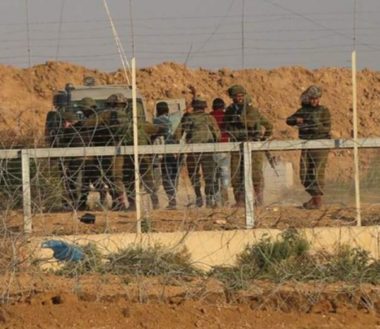 The Israeli army claimed, on Monday morning, that the soldiers abducted four Palestinians overnight after they allegedly tried to breach the perimeter fence in the southern part of the besieged Gaza Strip.

In a statement, the army said its soldiers arrested a young Palestinian man who was “trying to breach the fence,” and added that he carried a knife and a wire cutter.

It added that the soldiers also arrested three other Palestinians in a separate incident, after they attempted to breach the fence while carrying knives, according to the military statement. The four young men were moved to interrogation facilities.

It is worth mentioning that the soldiers frequent abduct Palestinians who cross the perimeter fence, including many who accidentally approach the fence while hunting, and others who had to cut the fence trying to cross into nearby Israeli areas seeking work outside of the besieged and impoverished Gaza Strip.

The army also repeatedly opens fire at Palestinian farmers, workers, and shepherds near the fence across the eastern parts of the Gaza Strip, in addition to the constant attacks targeting the fishermen and their boats in Gaza territorial waters, leading to dozens of casualties, including fatalities, in addition to serious property damage and the confiscation of many boats after abducting the fishermen.