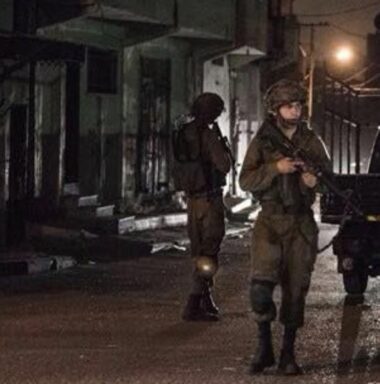 Israeli soldiers abducted, on Monday at dawn, seven Palestinians after the army invaded and violently searched many homes across the Hebron governorate, in the southern part of the occupied West Bank.

They added that the soldiers also searched homes in Sa’ir town, northeast of Hebron, before abducting two siblings, identified as Wa’el and Mohammad Mousa Shaker.

The soldiers also abducted Bassel Haitham Badawi, 16, and Abdul-Latif Jawabra, from their homes in the al-‘Arroub refugee camp, north of Hebron.

During the invasion into Beit Ummar, the soldiers summoned Mahmoud Shawkat Alqam, 18, for interrogation in Etzion military base and security center, north of Hebron.

In related news, the soldiers invaded Yatta and the Sammoa towns, in addition to installing roadblocks on Hebron’s northern road and the streets leading to Sa’ir and Halhoul town, before stopping and searching dozens of cars and interrogated many Palestinians while inspecting their ID cards.