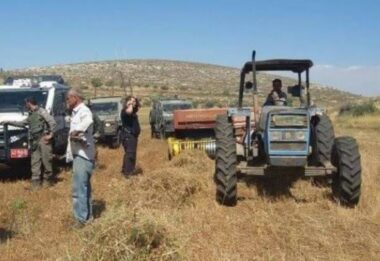 Israeli soldiers abducted, Wednesday, three Palestinians and confiscated a tractor, while they were plowing their lands in the ar-Rakeez area, in Masafer Yatta, south of Hebron, in the southern part of the occupied West Bank.

He added that the soldiers also confiscated a tractor the Palestinians were using while plowing their lands.

“The soldiers have been escalating their violations against the Palestinians in Masafer Yatta, especially in the al-Mafqara and ar-Rakeez areas that are surrounded by many illegal colonies,” Al-Amour said, “The Palestinians are denied access to large swaths of their farmlands, especially since Israel wants to pave a new segregated road that would link between the various colonies in the area.”