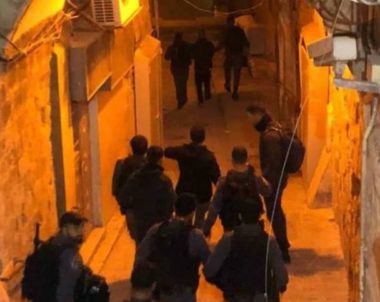 Israeli soldiers abducted, on Monday at night, three Palestinians from several parts of the occupied capital, Jerusalem, in the West Bank.

Media sources said the soldiers abducted two teenage boys, who remained unidentified at the time of this report, near Bab al-Amoud, in the Old City of Jerusalem, and took them to a nearby interrogation facility.

They added that the soldiers also abducted a young man, identified as Moath Yousef Shiokhy, from his home in Silwan town, south of the Al-Aqsa Mosque, and stormed the home of Amer Zidani to abduct him, but he was not there.