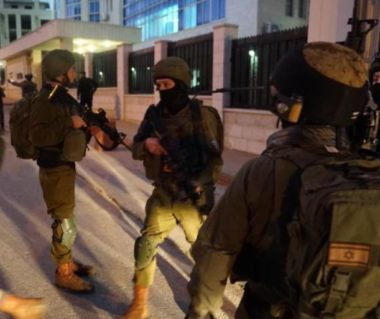 The Palestinian Prisoners’ Society (PPS) has reported that Israeli soldiers abducted, on Tuesday at dawn, at least twenty Palestinians, after the army invaded and searched many homes, in several parts of the occupied West Bank.

The PPS office in Hebron, in the southern part of the West Bank, said the soldiers invaded many neighborhoods, before storming homes, abducted a former political prisoner, identified as Amin Rajabi Ghneim, and confiscated his car.

The soldiers also abducted Aseed Mohammad al-Harni, from his home in Yatta town, south of Hebron.

The soldiers claimed they located a M16 rifle, and a pistol, during the searches of homes and buildings in Hebron.

Furthermore, the soldiers abducted a former political prisoner, identified as Mohammad Rauf Hamdan, in addition to Mustafa Ahmad al-‘Aarda, from their homes in Arraba town, south of the northern West Bank city of Jenin.

In Azzoun town, east of the northern West Bank city of Qalqilia, the soldiers abducted Zaki Ribhi Radwan, 40, after invading his home and searching it.

In addition, the soldiers abducted five young Palestinian men, including a former political prisoner and siblings, in Nablus governorate, in northern West Bank,

The soldiers also  abducted eight Palestinians, including a wounded child, from their homes in Hizma town, northeast of occupied East Jerusalem.