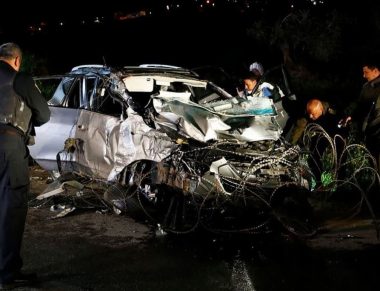 Israeli forces raided the home of a young Palestinian man suspected of killing two Israeli soldiers and injuring two others, with his car, at an Israeli military checkpoint near Jenin, northern West Bank, on Friday evening, according to local sources.

Israeli Ynet News said both Israeli and Palestinian medics provided first aid to the wounded soldiers, before the two soldiers were pronounced dead.

It added that the wounded soldiers were rushed to Rabin Medical center in Petah Tikva.

It also stated that the Palestinian driver, identified as Ala Rateb Kabaha, 26,  suffered light-to-moderate wounds and was treated at the scene, before he was moved to Hillel Yaffe Medical Center in Hadera, after the soldiers refused to allow Palestinian medics to approach him.

Israeli army and police raided the family home the Palestinian driver in the village of Barta’a, to the west of Jenin, searched it and interrogated members of his family, WAFA reports.

It is still unclear whether the incident was a car ramming attack based on nationalistic motives or a mere traffic accident.

Kabaha himself was shot and injured by the soldiers just after the deadly incident. He was interrogated despite of his wounds, before he was moved by the soldiers to a hospital in Israel for medical treatment.

The Israeli military shut down the checkpoint to Palestinian traffic just following the incident.

The Israeli army and various Israeli media outlets have already classified the incident as a “deliberate ramming attack.”

One of Kabaha’s relatives told Haaretz Israeli online daily that Ala is a house painter, and went to Jenin to buy paint before heading back homes.

He added that the Palestinian is not a member of any Palestinian organization, and that what happened is nothing more than an unfortunate traffic accident, and not a deliberate attack as the military is claiming.

So far, Israel has not released the names of the Israeli soldiers who were killed, and injured, in the incident.