Weekly Procession Against The Annexation Wall, Colonies, Held In Bil’in 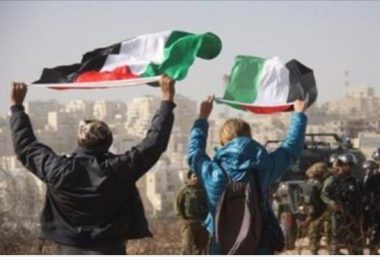 On Friday, dozens of Palestinians, accompanied by Israeli and international peace activists, held the weekly nonviolent procession against the illegal Israeli Annexation Wall and colonies, in Bil’in village, west of the central West Bank city of Ramallah.

The Protesters marched while chanting for liberation and independence, for the occupied Palestinian capital, Jerusalem, and denouncing the illegal U.S. recognition of the city as a unified capital of Israel.

They also carried posters of imprisoned nonviolent activists, including the world-renowned teenage journalist ‘Ahed Tamimi, in addition to Monther Tamimi, and several other detained figures of the nonviolent resistance movement in occupied Palestine.

Some protesters started banging on the iron gate of the annexation wall, and wrote graffiti, calling for ending the illegal Israeli occupation, its colonialist activities, for liberation of Palestine and the release of all political prisoners.

The Popular Committee against the Annexation Wall and Colonies in Bil’in, also denounced the assassination attempt which targeted Palestinian Prime Minister Rami al-Hamdallah, during his visit to Gaza, and called on all national and Islamic factions in Palestine to unite and end all internal divisions, to foil Israeli attempts aims at creating and escalating conflicts among them.

It said that only national unity can protect and maintain the legitimate Palestinian struggle for independence and statehood and can counter the illegal Israeli and American policies regarding Palestine, its occupied capital, Jerusalem, and all internationally-guaranteed rights, including the Right of Return of all displaced refugees.

Dr. Rateb Abu Rahma, the head of the Popular Committee in Bil’in, called for widening the nonviolent resistance to include all parts of occupied Palestine, to strengthen Palestinian steadfastness determination until liberation and independence.