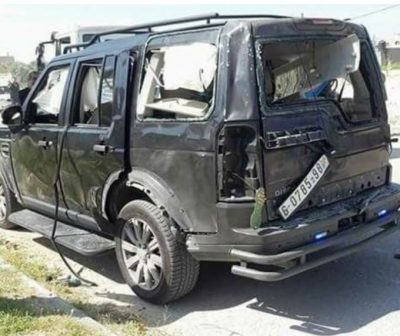 Both Hamdallah and Faraj were in a convoy of vehicles when three wired cars exploded just as they passed by them, causing damage, before gunmen exchanged fire with the bodyguards, mildly wounding seven of them.

Commenting on the assassination attempt, Hamdallah said that what happened will only push for boosting all efforts aimed at serving the Gaza Strip, and ending the internal divisions.

“With full determination, we will continue our work in Gaza, and will implement all governmental projects and tasks,” he said, “This is a cowardice, disgraceful act.”

Although Hamdallah and Faraj left the Gaza after participating in the opening ceremony of a water desalination plant, after the explosions took place, they said that they would be back, and intend continue their efforts to maintain unity, and implement more projects that would help the improvised coastal region.

It is worth mentioning that Lieutenant Faraj indirectly held Hamas responsible for the assassination attempt, and said the movement is currently the only party that oversees security in Gaza.

He also described the incident as cowardice and aimed at sabotaging national unity.

Palestinian President’s office held Hamas responsible for the attack, as it is currently solely in charge of security in Gaza, and said that this incident is meant to foil the attempts to achieve comprehensive reconciliation and unity.

“This attack targets the efforts of President Mahmoud Abbas to achieve unity and end all internal divisions,” the office added in a statement, “Whoever is behind the explosions is directly serving Israel’s interests, this is a serious and dangerous development and a desperate attempt to foil unity efforts.”

Adnan Dmeiri, the spokesperson of Palestinian Security Services in the West Bank also held Hamas responsible for the attack and said that this serious incident targets the unity of the Palestinian people and all reconciliation efforts.

“What happened today reminds us of the assassination attempt which targeted President Mahmoud Abbas several years ago,” Dmeiri said, “Political assassinations are a trait of the Muslim Brotherhood, and it never left the ideology of Hamas in targeting those who do not agree with its politics.”

Furthermore, Azzam al-Ahmad, a member of the Central Committee of Fateh movement said that President Abbas, who is currently visiting King Abdullah of Jordan, has decided to return to the West Bank.

Al-Ahmad also held Hamas responsible for the attack, and demanded the movement to relinquish all responsibilities, including security, to the unity government, in addition to calling on the Egyptian security delegation, currently visiting Gaza, to clearly name the parties that are obstructing national unity and reconciliation.

It is worth mentioning that the Egyptian security delegation said it won’t leave Gaza, and will continue its efforts to help the Palestinians achieve national unity and security.

Meanwhile, Hamas movement rejected what it called the “readily available accusations” and denied having any connection to the attack.

Spokesperson of the Hamas-run authority in Gaza, Fawzi Barhoum, said that Hamas strongly condemns the explosions and assassination attempt, and considers what happened as a crime targeting the Palestinian people, and an attempt to create serious tension.

He added that the Interior Ministry, and the National Security devices, are investigating all circumstances of the attack.

Nafeth Azzam, a senior political leader of the Islamic Jihad, issued a strong condemnation of the attack, and told the Palestinian Radio that Hamdallah’s visit to Gaza serves the interests of all factions in Gaza, including Hamas and the Islamic Jihad.

Azzam called on all parties in Gaza to unite, and protect the interests of the Palestinian people.