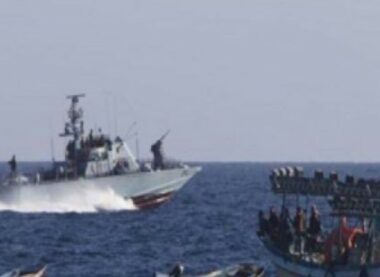 Updated: Israeli soldiers and naval troops attacked, Monday, Palestinian farmers and their lands, and fishermen and invaded farmlands in the besieged Gaza Strip.

Media sources said the soldiers stationed on military towers across the fence fired many live rounds at Palestinian farmers on their land east of Khuza’a and al-Qarara towns, northeast of Khan Younis, in the southern part of the Gaza Strip.

The sources added that the soldiers fired many live rounds into Palestinian farmlands east of Wadi as-Salqa town, southeast of Deir al-Balah, in the central Gaza Strip.

The invasion was carried out by six armored bulldozers and two Merkava tanks before the soldiers bulldozed sections near the fence and installed sand hills near the fence.

In addition, Israeli navy ships fired many live rounds at Palestinian fishing boats in the Zahra’ Sea area, southwest of Gaza city, forcing them to leave.