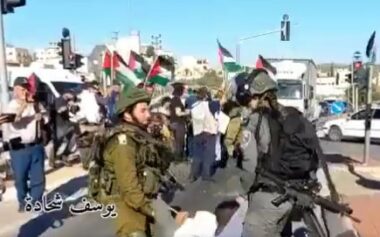 On Wednesday, Israeli soldiers attacked a nonviolent procession against the escalating Israeli violations and attacks by the Israeli occupation soldiers and the colonizers against the Palestinians, and the confiscation of their lands in Hares town, west of the central West Bank city of Salfit.

The Palestinians nonviolently marched carrying Palestinian flags at the western entrance of Hares town before the soldiers attacked them with concussion grenades and gas bombs and prevented them from reaching their lands in the Khallet Hadidi area, west of the town.

Medical sources said two Palestinians were injured after the army hurled concussion grenades at them.

In addition, the soldiers installed many roadblocks at the village entrance and surrounding streets, while Israeli police officers also stopped Palestinian cars and ticketed many drivers.

The procession was organized by the residents, the Wall & Colonization Resistance Commission, various political parties under the ambarella of the Palestine Liberation Organization (PLO), and various civil society institutions and was also attended by many international peace activists.

Moayyad Sha’ban, the head of the Salfit office of the Wall & Colonization Resistance Commission, said the Palestinians will not be silent, will defend their homes and lands, and will not allow the illegal colonizers to continue assaulting them.

He added that the colonizers enjoy the protection of the occupation army, and the fundamentalist government that never stops the violations and crimes and continues to illegally annex the Palestinian lands to build and expand its illegal colonies.