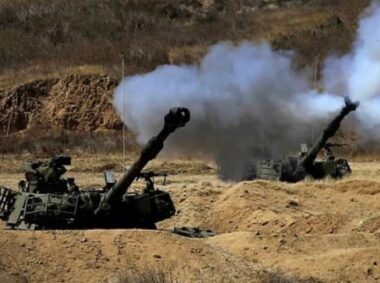 The Israeli army fired, late on Tuesday at night, many artillery and tanks shells targeting several areas in the besieged and impoverished Gaza Strip, causing damage, and wounding a young man.

The soldiers fired a tank shell directly striking a home, owned by members of the Abdul-Jawad family in the al-Maghazi refugee camp, in central Gaza, causing serious damage and wounding a young man.

Medics and rescue teams rushed to the refugee camp and moved the young man to the al-Aqsa hospital in Deir al-Balah, after being injured in the leg in addition to suffering cuts and bruises.

Furthermore, Israeli tanks fired several shells into a few sites east of Gaza city, the al-Boreij and al-Maghazi refugee camps, in central Gaza, in addition to the east of Beit Hanoun and Beit Lahia, in the northern part of the coastal region, causing property damage and fires to the targeted buildings and surrounding homes.