Soldiers Abduct Six Palestinians, Including Father And Son, One Woman, In Jerusalem 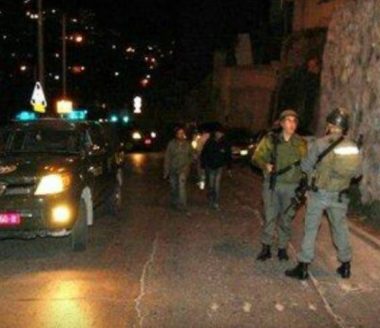 Israeli soldiers abducted, on Tuesday evening, five Palestinians, including a woman, a father, and his sons, in the al-‘Isawiya town, in addition to one child in Hizma town, in the occupied Palestinian capital Jerusalem.

They said the soldiers abducted a woman, who remained unidentified at the time of this report, in addition to Arafat Ahmad Mustafa, Mohammad Na’el Obeid, Wasim Nayef Obeid, and his son, Nayef.

The soldiers also invaded Hizma town, northeast of Jerusalem, and abducted a child, identified as Abed Salem Khatib, 16, after stopping him in front of his home.

Many Palestinians protested the invasions and hurled stones at the army jeeps, while the soldiers fired many gas bombs and concussion grenades.

In related news, the soldiers handed the secretary of Fateh movement in Jerusalem, Shadi Mitwer, a military order preventing him from communicating with 21 Palestinian figures, including the office of President Mahmoud Abbas, and various leaders of the Fateh movement.

It is worth mentioning that Mitwer has been subject to frequent Israeli violations, including being repeatedly detained and interrogated, and was also prohibited from entering any other area of the West Bank.

These violations also target many senior officials, including Jerusalem governor, Adnan Gheith, who is repeatedly detained and interrogated.

On Tuesday at dawn, the soldiers invaded Kafr Ra’ey village, south of Jenin, and Salem village, east of Nablus, in the northern parts of the West Bank, searched homes, and abducted four siblings.

Also on Tuesday morning, Israeli navy ships fired several live rounds at Palestinian fishing boats, in addition to attacking them with water cannons, near the shore of the Sudaniyya sea, northwest of Gaza city.

On Monday at night, the soldiers invaded the al-Fawwar refugee camp, south of the southern West Bank city of Hebron, and abducted a Palestinian child.