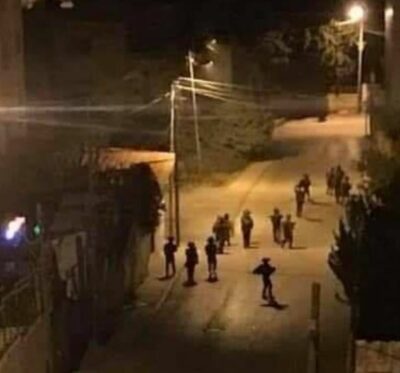 Montaser Sammour, the head of the Jenin office of the Palestinian Prisoners Society (PPS), said the soldiers abducted Bilal Nabil Thiab, and his brother Bassam, from their homes.

Sammour added that the two Palestinian siblings are also former political prisoners, who were imprisoned by the Israeli occupation army.

Their brother Azzam is a political prisoner who was abducted by the army in the year 2001, and was sentenced to life in prison.

In addition, the soldiers invaded and searched several homes in Salem village, east of Nablus, before abducting two siblings, identified as Abdul-Rahman Eyad Jabour, and his brother, Adham.

During the searches of homes in the village, the soldiers interrogated many Palestinians while inspecting their ID cards.

On Monday evening, the soldiers fired live rounds at a Palestinian car at the entrance of Faqqu’a village, northeast of Jenin, puncturing one of its tires.

Resident Hasan Abu Khamis, said the soldiers who are stationed at the entrance of the town, fired the rounds at his car, before searching and interrogating him while inspecting his ID card.

The army did not abduct the Palestinian and did not provide a credible explanation for firing the rounds.

The soldiers also stopped and searched many cars and interrogated the residents while inspecting their ID cards.