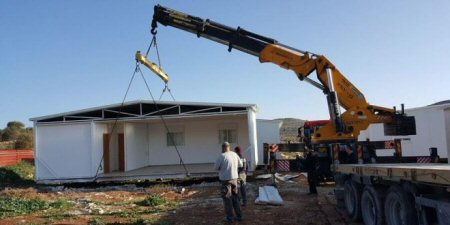 In response to Israel’s announcement that they have approved an additional 780 colonial settlement units, a number of countries have issued statements condemning the move. They include the UK, Egypt, Ireland, Jordan, the European Union (EU) and the Palestinian Authority (PA).

A spokesperson for the Palestinian Authority, Nabil Abu Rudeineh, stated that it is clear from Israel’s actions that they are engaging in preemptive settlement expansion in order to undermine any effort that US President-elect Joe Biden’s administration might make to try to stop further settlement expansion and relaunch the stalled peace process.

The PA, along with the governments of the United Kingdon, Ireland, Jordan and Egypt, strongly condemned the Israeli authorities’ decision to build 780 new colonial settlement housing units in illegally-occupied West Bank settlements.

Abu Rudeinah emphasized the fact that settlements are illegal under international law, and violate numerous United Nations Security Council resolutions, particularly resolution 2334, which was internationally endorsed, including by the United States, stressing that settlement activities only server to undermine the two-state solution.

Mohammad Shtayyeh, the Palestinian Prime Minister, said in a Cabinet meeting on Monday that he hoped the inauguration of Joe Biden on Wednesday as US President would put an end to the illegal Israeli settlement activities in the occupied Palestinian territories.

He described Israel’s Sunday announcement of settlement expansion as part of an “unprecedented settlement onslaught” by Israeli authorities, which have approved the construction of tens of thousands of such units during the course of the Trump administration.

Shateyyah added that it is clear that the Israeli government rushed to push through this plan in advance of Trump leaving office on Wednesday.

Ireland’s President Foreign Minister Simon Coveney expressed extreme disappointment at Sunday’s announcement by Israeli authorities that they would allow construction of an additional 780 units, noting that “settlement activity in the occupied Palestinian territory is illegal under international law”.

Coveney also referenced another recent settlement expansion that was approved by Israel, saying, “I continue to be very concerned about the tender for construction of a new settlement of over 1,200 housing units in Givat Hamatos”. If that settlement bloc is completed, it will cut off Palestinians from Bethlehem from both Jerusalem and the rest of the West Bank.

He stated, “I reiterate my call on the Israeli Government to reverse this decision and to halt all settlement activity. I urge all parties to respect international law and to avoid unilateral actions which erode trust and confidence – critical components to the resumption of meaningful negotiations – between the partie.”

For its part, the UK Foreign, Commonwealth and Development Office issued a statement saying, in part, “Settlements are illegal under international law and risk undermining the physical viability of the two-state solution. We call for the construction of these in East Jerusalem and elsewhere in the West Bank to cease immediately.”

A spokesperson for the European Union, which had recently expressed hope that appeasement of Israeli Prime Minister Binyamin Netanyahu through normalization with Arab nations would somehow stop the Prime Minister from carrying through with his promise to vastly expand the Israeli land takeover in the West Bank, said the new announcement by the Israeli government “undermines the positive developments of normalization agreements between Israel and a number of Arab States”.

The EU called on Israel to “end all settlement activity,” in the occupied West Bank, and noted that the settlement expansion “is contrary to international law and further undermines the prospects of a viable two-state solution”.

The Jordanian Ministry of Foreign Affairs spokesman Dhaifallah Ali Al-Fayez also denounced the legalization of Israeli settlement outposts constructed on Palestinian land, saying that the move is a flagrant and grave breach of international law and resolutions including UN Security Council Resolution 2334.

Al-Fayez stressed that this Israeli decision violates international law and undermines the foundations of peace, as well as undermining the chances of a two-state solution based on international legitimacy, and called on the international community to shoulder its responsibilities by pressuring Israel to stop its settlement policy.

During the course f the Trump administration, Israel approved plans for over 27,000 settler units. All of these are considered illegal under international law. President-elect Joe Biden is expected to return to past US policy, which condemned Israeli settlement expansion as a direct violation of international law and of its obligations as an Occupying Power under the Fourth Geneva Convention.