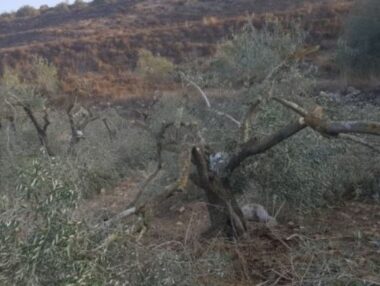 Rateb Jabour, the coordinator of the Popular Committee against the Annexation Wall and Colonies in Hebron, said the colonists invaded a privately-owned Palestinian olive orchard in Shu’ab al-Batim area, and cut the 100 saplings, owned by a local resident.

He added that the colonists have recently escalated their attacks and violations against the Palestinians in the Masafer Yatta area, to force them out of their lands for the benefit of the illegal construction and expansion of the colonies.

Israel’s colonies in the occupied West Bank, including those in and around occupied East Jerusalem, are illegal and are considered as war crimes under International Law, in addition to violating the Fourth Geneva Convention to which Israel is a signatory and a constant violator, in addition to various United Nations and Security Council resolutions.