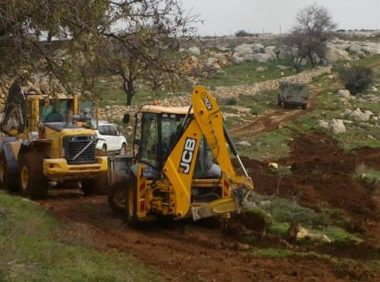 On Thursday, Israeli soldiers, accompanied by several armored bulldozers, invaded Palestinian lands in ‘Aseera al-Qibliya village, south of the northern West Bank city of Nablus, and bulldozed them in order to expand their nearby military base.

Hafeth Saleh, the head of ‘Aseera al-Qibliya Village Council, said the army bulldozed nearly five and a half Dunams (1.35 Dunams), and is still operating in the area.

He added that the lands are located near a military base, which was also installed on Palestinian lands, in the southern area of the village.

Saleh also stated that the army intends to expand its military base, which means using more lands as buffer zones around it.