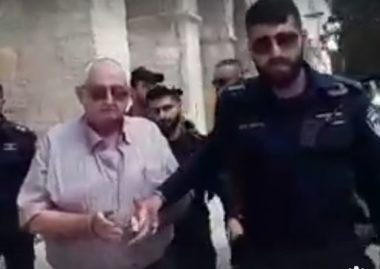 Israeli soldiers abducted, Thursday, three employees of the Palestinian Waqf and Islamic Endowment, including the head of Construction Committee, in Al-Aqsa Mosque, in occupied East Jerusalem, the WAFA Palestinian News Agency has reported.

The soldiers abducted the head of the Construction Committee of the Waqf Department, Engineer Bassam Hallaq, in addition to the department’s employee Mohammad al-Hadra.

In addition, the head of the media department of Waqf committee in occupied Jerusalem, Firas ad-Dibis, said the soldiers later abducted Engineer Taha Oweida, who works at the construction committee.

It is worth mentioning that al-Hallaq and al-Hadra were taken prisoner while truing to fix the pedestrian walkways leading to the al-Aqsa near Bab al-Qattanin (The Cotton Merchants’ Gate).