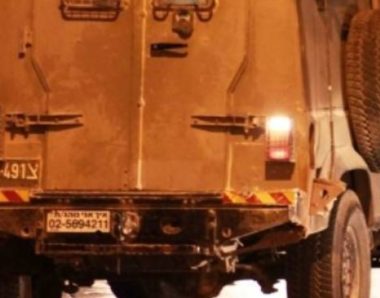 Israeli soldiers invaded, on Thursday at dawn, the al-Jiftlik village, north of Jericho in the occupied West Bank, abducted one Palestinian and confiscated his brother’s car.

The soldiers stormed and searched several homes during the invasion, and interrogated a few Palestinians while inspecting their ID cards.

During the invasion, the soldiers abducted Mahmoud Abu Jouda, and confiscated the car of his brother, Anwar Abu Jouda.

In related news, the soldiers abducted two Palestinians from their homes in Hebron city, in the southern part of the occupied West Bank, and installed military roadblocks.

The soldiers also abducted a father and his son, from ‘Aida refugee camp, north of Bethlehem.