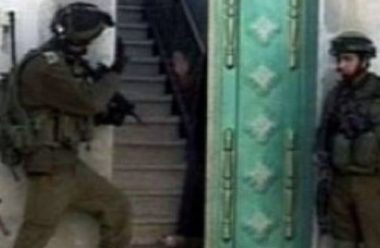 Israeli soldiers abducted, on Thursday at dawn, two Palestinians from their homes in Hebron city, in the southern part of the occupied West Bank, and installed military roadblocks. Illegal Israeli colonists punctured tires of two cars near Nablus, and wrote racist graffiti.

Besides the homes of the two abducted Palestinians, two owners of some of the invaded homes have been identified as Khalil Abdul-Aziz and Hani Qawasmi.

Furthermore, the soldiers installed military roadblocks in several areas in Hebron governorate, especially in Halhoul Bridge, north of the city, and the entrance of Ethna town, west of the city.

The army stopped and ransacked several cars, and interrogated many Palestinians while inspecting their ID cards.

In related news, several extremist illegal Israeli colonists invaded the northern area of Einabus village, south of the northern West Bank city of Nablus, punctured tires of two cars, and wrote racist graffiti on walls of a number of homes, the local mosque and clinic.