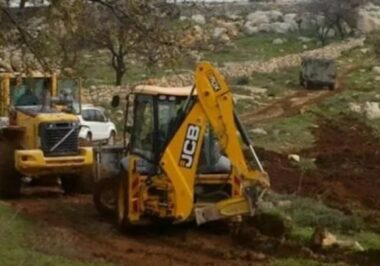 On Monday, Israeli soldiers, accompanied by bulldozers, invaded Palestinian lands near Huwwara, south of the northern West Bank city of Nablus, before uprooting and razing at least fifty Dunams to expand the illegal Yitzhar colony which was built on stolen Palestinian lands.

Qassem Awad, a Palestinian from Huwwara and a member of the Wall & Colonization Resistance Commission, said the soldiers isolated the entire area after invading it.

Awad added that the soldiers then bulldozed and uprooted fifty Dunams of privately-owned Palestinian lands to expand the illegal Yitzhar colony.

He also said that a group of colonizers installed a few mobile homes in the area to install an outpost that would be part of the colony and added that the soldiers barred the Palestinian owners of the lands from entering their property.

The official said the Israeli government and its occupying army are complicit in the serious violations by the colonizers and are ongoing with the construction and expansion of the colonies in direct violation of International Law.